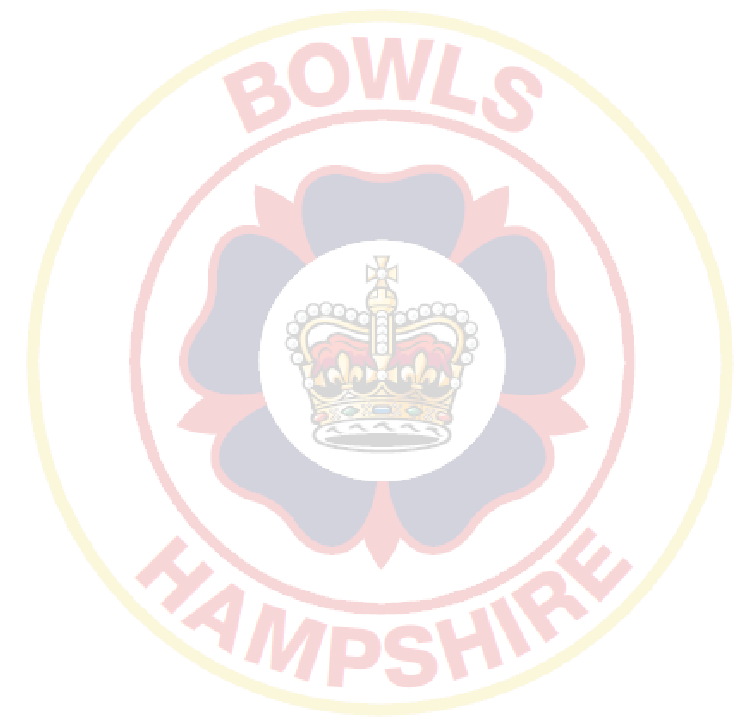 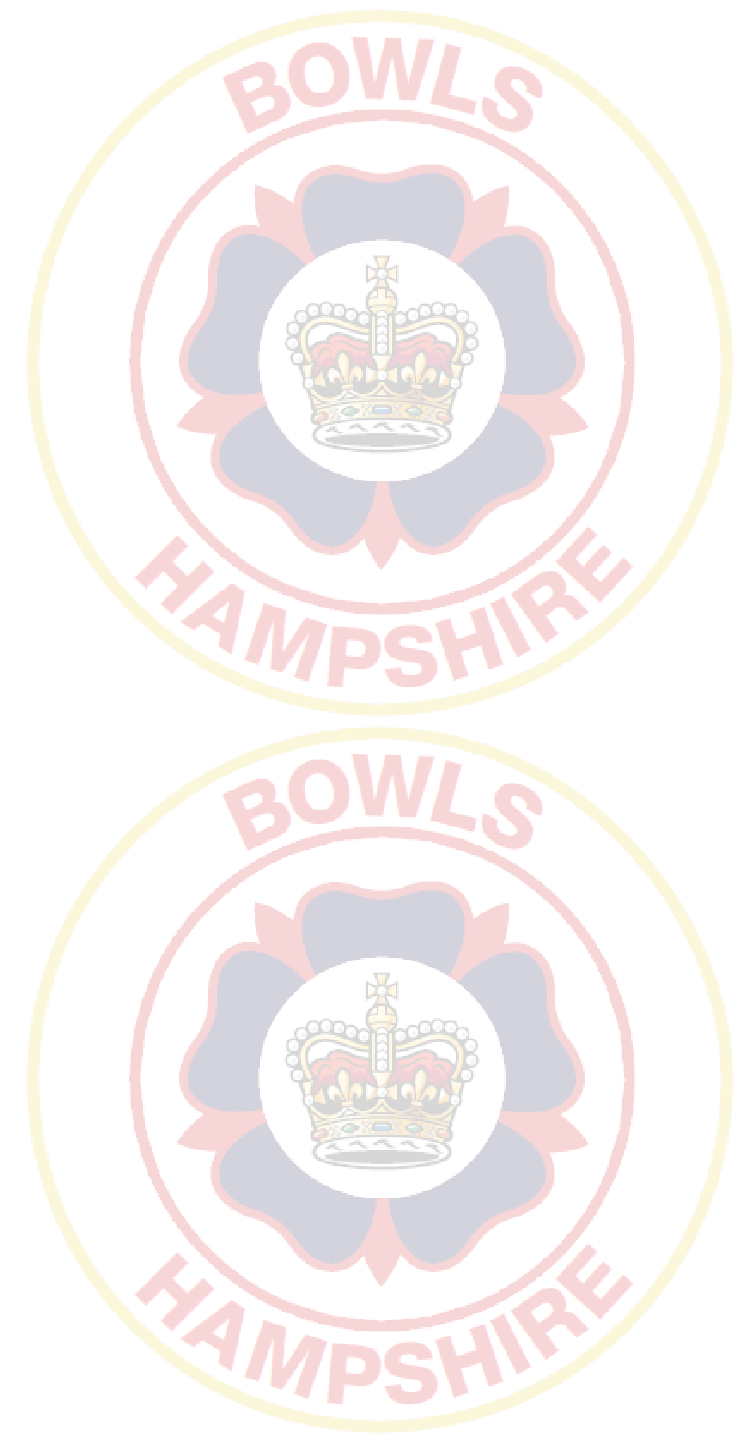 The County has received the very sad news that Sheila Goodwin of Alton Social BC passed away last night. Sheila was actively involved with the County, having served for many years on the Executive, having been the County Coach and the first Development Officer for Bowls Hampshire. Our thoughts are with her family at this difficult time

The funeral is to take place at 12.30pm on 6th December at Basingstoke Crematorium and then afterwards at the Alton House Hotel, Alton

We have heard the sad news that Dick Smith, President of the HCBA in 2003, passed away last weekend. The funeral will be at Easthampstead Park Cemetery and Crematorium at 11.30am on 8 November 2019. The wake will be held from 12.30pm onwards at Yateley Bowling Club (do not park on grass outside club - please use car parks). Our thoughts are with the family at this time

Atherley BC will be the venue for the semi finals and final of the Men’s County 2 Wood Triples at 1.30pm on Saturday 14 September

A good morning in the Mixed Fours as Julie Hudson, Hazel Gabriel, Alan Geary and Chris Daniels of Boscombe Cliff won their round of 16 match and will now play in the quarter final this afternoon. The news was equally good in the afternoon as the four won through by one shot and will be back tomorrow morning in the semi final

In the first round of the Men’s Singles this morning there was a win for Chris Daniels of Boscombe Cliff but defeats for Ric Newson of Oakley and Alan Geary of Bowsombe Cliff. Unfortunately the second round was not quite as good as Chris was defeated

In the opening rounds of the Men’s 2 Wood Singles there was a win for Peter Ward of Ringwood but one shot defeats for both Simon Doig of Fleming Park and John Keat of Atherley. Peter also won his second round match and will play again in the Round of 16 later this afternoon. Unfortunately Peter’s run ended in the next match

Today saw the start of the Mixed Pairs and in the Round of 16 there was a one shot win for Joe Sharp and Sarah Bowen of Cove. They will play in the quarter final tomorrow morning

Better news as both our Men’s Triples of Alan Geary, Russell Morgan, Chris Daniels of Boscombe Cliff and Barry Jannaway, Barry Watts, Tony Spridgeon of Folland both won their first round matches

A good start for Lynda Gibbs, Julie Greenwood, Wendy Brown and Kath Patrick of Milton Park Ladies who won their first round match in the Women’s Senior Fours this morning. They will play again tomorrow morning in the second round

In the preliminary round of the Men’s Triples this afternoon, the Boscombe Cliff trio of Alan Geary, Russell Morgan and Chris Daniels won through and will now play in the first round tomorrow morning

Today sees the start of the second half of the Championships and the beginning of the Men’s Fours. As with the first two weeks it has been a mixed morning with the Alton four of John Blair, Andy Paine, Paul Schoﬁeld and David Sims losing their first round match but a better result for the Atherley four of Adam Clark, John Keat, Colin Thresher and Richard Shelley who win and progress to the second round this afternoon. Unfortunately the afternoon did not prove to be as good as the rink was defeated in the second round

Nicole Rogers and Heather Statham of Oakley had a good win in the quarter final of the Women’s Junior Pairs this morning but then had to face Hertfordshire, the reigning title holders in the semi final. Sadly it went the way of Hertfordshire but a great achievement to reach the last four

Today saw the start of the Women’s Pairs and in the preliminary round, the New Milton pair of Chris Cooke and Janet Prince were unfortunately defeated by Devon, but better news in the early first round where Karen Cranham and Donna Taylor of Cove won through against Cambridgeshire

Sue Lewis Parkes, Lesley Mitchell and Janet Ballard of Waterside won their latest round this morning and now progress to the quarter final this afternoon. Update - unfortunately they couldnt continue their good run and were defeated this afternoon

A mixed morning in the Women’s Triples as unfortunately the Oakley trio of Nicole Rogers, Heather Statham and Alice Lovett of Oakley lost but better news with Sue Lewis Parkes, Lesley Mitchell and Janet Ballard of Waterside winning through to the second round. In the afternoon the good news continued as the Waterside triple won their next match and will now play in the third round tomorrow morning

This afternoon saw the start of the Women’s Triples but our run of early exits continued as the Fleet United team of Janice Doran, June Messenger and Jenny Harvey were defeated in the preliminary round

It was an agonising one shot defeat for the Senior Men’s Four of Jim Heard, Steve Dowdell, Andy Anderson and Ray Long of Fleming Park in the semi final this morning but a great achievement to reach the last four

A mixed day at Leamington today as Alex Linter of Priory and Danny Smith of Southsea Waverley were defeated in the opening round of the Men’s Junior Pairs but better news as Nicole Rogers won the first round match in the Women’s Champions of Champion’s Singles. Unfortunately however Nicole was defeated in the quarter final this afternoon

A very good win though for Jim Heard, Steve Dowdell, Andy Anderson and Ray Long of Fleming Park in the Men’s Senior Fours which they repeated this afternoon and will now play in the semi final tomorrow morning

Not a good morning as the Milton Park four of Carla Woolvin, Pat Macrae, Julie Greenwood and Mandy Orchard and the Oakley four or Nicole Rogers, Lorna Devonish, Heather Statham and Alice Lovett both lost their first round matches

The afternoon was better however as our Men’s Senior Four of Jim Heard, Steve Dowdell, Andy Anderson and Ray Long of Fleming Park won their opening match against Somerset

Unfortunately Carol Pullin and Sandy Pullin of Fareham were defeated in the second round of the Women’s Senior Pairs but the Milton Park rink of Carla Woolvin, Pat Macrae, Julie Greenwood and Mandy Orchard won their preliminary round match in the Women’s Fours. Unfortunately the Swanmore four of Julie Hudson, Sue Dillon, Linda Johnson and Jean Philip lost in the early first round

Congratulations to Cove Men who won the County Club Championship this afternoon at Atherley. After defeating Ringwood in the semi final they played defending champions Southsea Waverley in the final and won through to take the title for the first time. The match scores were:

A mixed first day for Hampshire at the National Final’s in Leamington with disappointment for Nicole Rogers and Heather Statham, both of Oakley, who were defeated in the opening round of the Women’s Junior Pairs but better news in the Women’s Senior Pairs as Carol Pullin and Sandly Pullin of Fareham won their first round match against Nottinghamshire

Sadly it was not to be this morning for our Johns Trophy team in the Regional quarter final against the defending champions, Surrey, at Horsham BC as we were defeated by 84 shots to 130 and 2 points to 20

Please note that the Last Eights of the Women’s Pairs is being arranged due to the success of the Johns Trophy team qualifying for the Regional Finals on the same day. More details on the Last Eights page

Well done to our Johns Trophy team this afternoon defeating Kent by 122 shots to 115, winning on four rinks in a 18 points to 4 victory, which leaves us top of our group and qualifying for the regional quarter final next Saturday 13 July when we will play Surrey

A good result for our Johns Trophy team this afternoon over Bowls Isle of Wight, winning by 147 shots to 96, winning on five rinks in a 20 points to 2 victory

That puts us top of the group on 54 points although second placed Kent, on 40 points, have a game in hand which they will play against Sussex next Saturday

Well done to our White Rose Trophy rink of Danny Smith, Ashley Nethercliffe, Luke Townsend and Daniel Taylor who have qualified for Leamington by winning their South A Regional qualifier group this afternoon. They will now play at the National Championships on Sunday 1 September

Our Middleton Cup team were away at Kidlington this afternoon to play Bowls Oxfordshire. After a slow start we found ourselves 48 shots down overall at the 15th end and despite fighting back we were defeated by 120 shots to 125 and by 6 points to 16

In a rain shortened match our Johns Trophy team defeated Sussex this afternoon by 77 shots to 69, winning on three rinks to secure a 16 points to 6 victory

It is with great sadness that we have to report that Eddie Rowe, the HCBA President in 1994 and an Honorary Life Member of Bowls Hampshire, passed away this morning. A member of Woolston and District, Eddie was President of Southampton and District in 1988 and their Secretary from 1988 until 2012. The Funeral  for Eddie will take place on Friday 28 June at 11.30am at the Wessex Vale Crematorium, Bubb Lane, West End, SO30 2HL. No flowers please but donations, if desired, to Countess Mountbatten Hospice, Moorgreen Hospital, Botley Road, West End, Southampton, SO30 3JB which is the hospice that had been providing palliative home care to Eddie. Our thoughts are with his family

The rinks scores were:

Congratulations to both Nicole Rogers of Oakley and Danny Smith of Southsea Waverley who have been selected for the Bowls England Junior International Trials at Leamington Spa on 27 May. Ashley Nethercliffe of Oakely is also reserve

St. James’s Place have been sponsoring and supporting bowls for a number of years through its nationwide network of advisors, many of whom are keen bowlers themselves. From 2018 St. James’s Place, at a corporate level, made the decision to formalise a relationship with Bowls England to see that crucial support grow. They are the title sponsor of two of the headline events at the 2019 National Championships – the Women’s National Triples and Men’s National Senior Fours – and invest in core programmes to support team development in the run up to the 2022 Commonwealth Games in Birmingham

From 2019 this support is cascading support down through county associations, with St. James’s Place sponsoring a number of counties to include Hampshire. The county will receive funding to purchase new equipment, upgrade facilities and to support coaching initiatives as well as St. James’s Place delivering a programme of events to engage the bowls community. These events will integrate an aspect of bowls education (whether this be a Masterclass, greenkeeping etc.) coupled with a topical wealth management seminar and some hospitality. The events will be publicised to county members as well as to St. James’s Place clients to help bring new players in to the sport